Scientists at the University of Leeds in the UK have developed gold sheets so thin they’re technically two dimensional. In fact, this newest form of gold is just 2 atoms thick, the equivalent of 0.47 nanometers or about a million times thinner than a human finger nail. 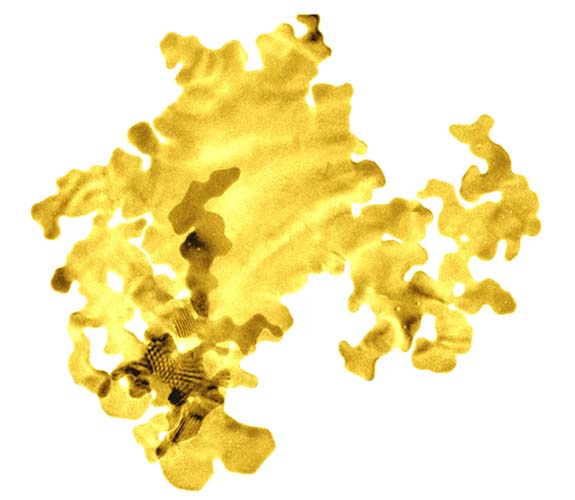 The ultra-thin gold — which the Leeds researchers are calling “nanoseaweed” because of its greenish tint and tangled appearance under the microscope — already has the medical technology and electronics industries buzzing with excitement. It’s still not clear if the material will have applications in the production of fine jewelry. 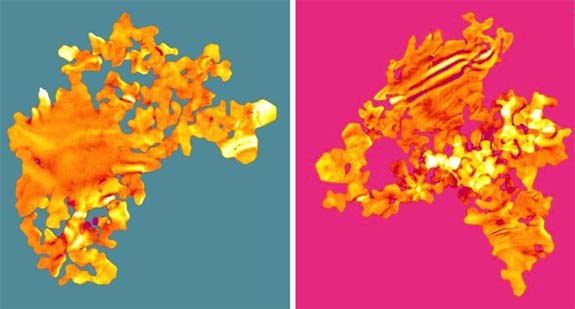 “This work amounts to a landmark achievement,” Sunjie Ye, study author and postdoctoral research fellow at the University of Leeds’ Molecular and Nanoscale Physics group, told CNN. “Not only does it open up the possibility that gold can be used more efficiently in existing technologies, it is providing a route which would allow material scientists to develop other 2D metals. This method could innovate nanomaterial manufacturing.”

To get a good grasp of just how thin nanoseaweed is, check out these comparisons…

• Gold leaf — which is often employed in the areas of art, architecture and luxury dining — can be pounded down to 7 millionths of an inch. That’s about 175 nanometers thick.
• Nanoseaweed, by comparison, has a thickness of just 0.47 nanometers.
• That means it would take a stack 372 sheets of nanoseaweed to match the thickness of a single sheet of gold leaf.

“Gold is a highly effective catalyst,” added the study’s co-author, Stephen Evans, who is also the head of the University of Leeds’ Molecular and Nanoscale Research group. “Because the nanosheets are so thin, just about every gold atom plays a part in the catalysis. It means the process is highly efficient. Our data suggests that industry could get the same effect from using a smaller amount of gold, and this has economic advantages when you are talking about a precious metal.”

Images courtesy of University of Leeds.