Occupying a wall case on the second floor of the Janet Annenberg Hooker Hall of Geology, Gems, and Minerals, the exhibit describes the fascinating natural phenomenon that produces star rubies, star sapphires and cat’s eye chrysoberyl.

Normally, the hall hosts more than six million visitors annually. But with all the Smithsonian museums in Washington, DC, temporarily closed to support the effort to contain the spread of COVID-19, we’re offering the next best thing.

Previous stops on the tour have included the Logan Sapphire, the Dom Pedro aquamarine, the Steamboat tourmaline and an amazing topaz exhibit.

Here’s how to navigate to the “Stars and Cat’s Eyes” exhibit.

– First, click on this link… The resulting page will be a gallery called “Geology, Gems & Minerals: Precious Gems 1.”

– Click the double-right arrows once to navigate to the gallery called “Geology, Gems & Minerals: Precious Gems 2.”

– Click and drag the screen 90 degrees so you can see the wall cases to the right.

– Touch the Plus Sign to zoom into the exhibit titled “Stars and Cat’s Eyes.”

(You may touch the “X” to close the map to get a better view of the gemstones. You may restore the map by clicking the “Second” floor navigation on the top-right of the screen.)

A wall panel next to the exhibit describes what make the “stars shine and the cat’s eyes gleam.”

“Tiny needle-shaped crystals that grew within larger crystals cause these optical effects. Light reflects off the needles, which are commonly crystals of the mineral rutile,” says the panel. “Depending on whether the needles grew in three directions or one, the result is a star or cat’s eye. To highlight the effect, a gem must be cut as a cabochon and in the correct orientation.” 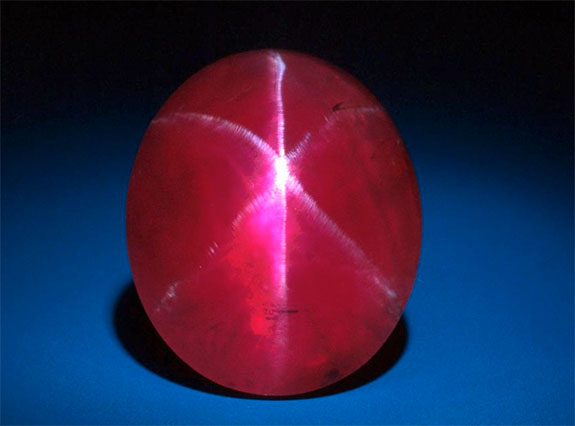 Carried around for years as a good luck charm by 1950s TV advertising pioneer Rosser Reeves, the 138.72-carat gemstone that bears his name is the largest and finest star ruby the world has ever known.

Before donating it to the Smithsonian in 1965, Reeves called the stone “my baby” and made it his constant companion. The advertising executive, who penned the M&Ms slogan, “Melts in your mouth, not in your hand,” was one of the most successful admen of his day. And he attributed much of his good luck to the beautiful scarlet stone.

Mined in Sri Lanka, the famous ruby was purchased at auction in 1953 by gem dealer Robert Fisher. At the time, it weighed 140 carats, but the asterism in the stone was slightly off center and the surface had abrasions. It was subsequently cut down to 138.72 carats to give it a prettier appearance and bring the “star” closer to the center. Reeves purchased the improved stone from Fisher’s son, Paul, in the late 1950s. 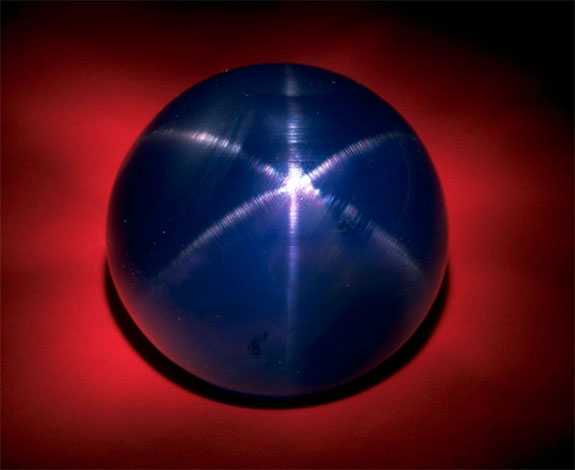 Originating from the historic Mogok mines of Burma (now Myanmar), the 330-carat blue-violet sapphire is said to have belonged to India’s Maharajah of Jodhpur and eventually obtained by famed mineral dealer and collector Martin Leo Ehrmann. The impressive gem was acquired for the National Gem Collection in 1961.

Renowned for its impressive size, intense color and sharp star, the Star of Asia is considered a phenomenal stone.

Historically, the finest and most vibrant gem-quality sapphires have come from Sri Lanka, Burma and the Kashmir region of India. The historic Mogok tract of Burma has been producing museum-quality rubies and sapphires since the 15th century. 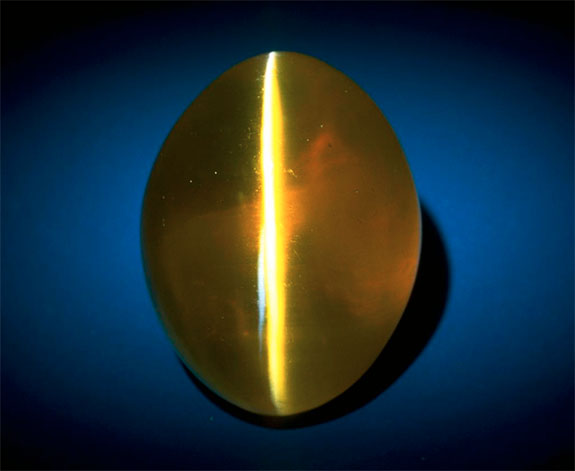 The 58.91-carat honey-colored cat’s eye was also mined in Sri Lanka and is considered one of the finest gems of its kind. According to the Smithsonian, the optical phenomenon of chatoyancy (the cat’s eye effect) can be displayed by many gemstones, but the most popular and highly prized is that of the mineral chrysoberyl. The Smithsonian obtained the gem in an exchange in 1961.