The lavish diamond earrings worn by French Queen Marie Antoinette during the 18th century are the focus of today’s virtual tour of the Smithsonian’s National Gem Collection in Washington, DC. 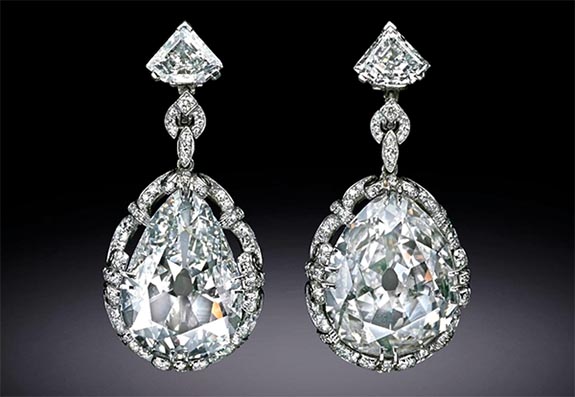 Gifted to the ill-fated Queen by Louis XVI, the large pear-shaped diamonds dangle from a ribbon-like platinum setting topped with shield-shaped stones. The pear-shaped diamonds weigh 14.25 carats and 20.34 carats, respectively, and were likely sourced in India or Brazil. Marie Antoinette was arrested fleeing the French Revolution and was guillotined in 1793. Historians still wonder how the earrings managed to escape the Revolution and remain in the French Royal Family.

There is strong evidence that, in 1853, Napoleon III presented these earrings to Empress Eugenie as a wedding gift. According to the Smithsonian, original engravings from the Illustrated London News wedding issue seem to confirm that Eugenie, indeed, wore the Queen’s jewelry. 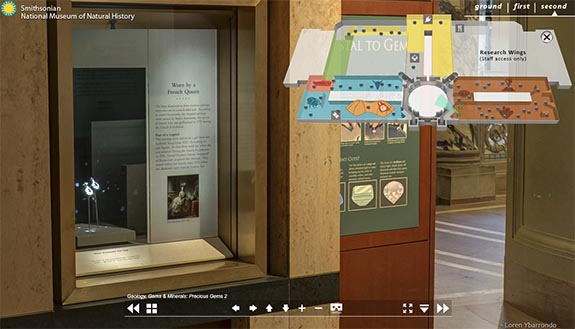 The “Marie Antoinette Earrings” occupy their own showcase at the Janet Annenberg Hooker Hall of Geology, Gems, and Minerals. The descriptive panel next to the showcase is titled “Worn by a Queen” and describes the historical significance of the jewelry displayed.

Normally, Smithsonian visitors would be able to see these magnificent earrings in person, but while most of the national museums remain temporarily closed in an effort to contain the spread of COVID-19, we continue to present these virtual tours of the National Gem Collection’s most famous items. Previous stops have included the “Hall Sapphire Necklace,” “Victoria-Transvaal Diamond,” “Carmen Lúcia Ruby,“ “Chalk Emerald,“ “Gifts from Napoleon,“ “Stars and Cat’s Eyes,“ “Logan Sapphire,“ “Dom Pedro“ aquamarine, “Steamboat“ tourmaline and a grouping of enormous topaz.

Here’s how to navigate to the exhibit called “Worn by a Queen.”

The resulting page will be a gallery called “Geology, Gems & Minerals: Precious Gems 1.”

— Next, click the double-right-arrow once to navigate to the gallery called “Geology, Gems & Minerals: Precious Gems 2.”

When you arrive, the foreground in the left part of the screen will show a four-sided glass case housing a topaz exhibit. In this view, there are showcases on the front wall, the right wall and the back wall.

– Click and drag the screen 180 degrees so you can see the back wall. The exhibit on the far right of the back wall is titled “Worn by a Queen.” It contains the “Marie Antoinette Diamond Earrings.” Touch the Plus Sign to zoom in.

(You may touch the “X” to remove the map. This will give you a better view of the jewelry. You may restore the map by clicking the “Second” floor navigation on the top-right of the screen.)

Empress Eugenie sold her personal jewels between 1870 and 1872 after she was exiled to England. The Marie Antionette Earrings ended up in the possession of Grand Duchess Tatiana Yousupoff of Russia. Famed jeweler Pierre Cartier purchased the diamond earrings from the Duchess’s family in 1928.

During her lifetime, the owner of General Foods was an avid collector of high-profile, Royal Family fine jewelry.

Post’s daughter, Eleanor Barzin, generously gifted the “Marie Antoinette Earrings” to the Smithsonian in 1964. It was one of many notable pieces that were donated to the Smithsonian by the Post family. The items included the “Maximilian Emerald Ring,” “Blue Heart Diamond,” “Napoleon Diamond Necklace,” “Marie-Louise Diadem” and the “Post Emerald Necklace.” Marjorie Merriweather Post passed away in 1973 at the age of 86.