The Miami Hurricanes finally unveiled the 2020 edition of their famous “turnover chain” during the highly ranked team’s 47-34 road victory against the Louisville Cardinals on Saturday. Cornerback Al Blades Jr. got to wear the massive, gem-encrusted Florida-shaped pendant after picking off a pass from Louisville quarterback Malik Cunningham late in the second quarter. 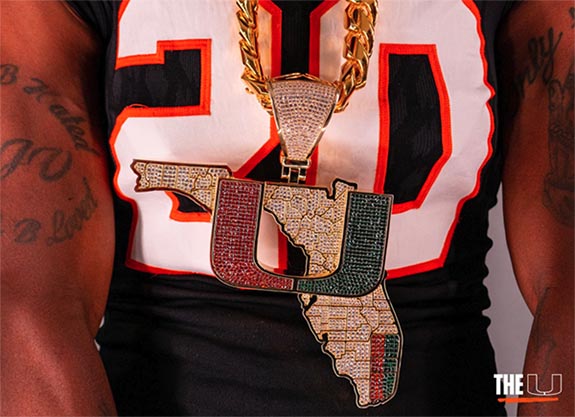 The pendant is affixed to a massive Cuban-link chain that weighs 2 kilograms (4.4 pounds) and measures 32 inches long. The Florida-shaped pendant weighs 300 grams and is dotted with 4,000 sapphires set in 10-karat yellow gold. The design incorporates the Hurricanes’ “U” logo positioned over the northern part of the state. The “U” is emblazoned with 700 orange sapphires and 700 green sapphires to match the team’s colors.

Most of the state of Florida is set with white sapphires, except for southeastern region, including Dade, Broward and Palm Beach counties, which are key recruiting areas near the school’s home base in Miami. On the pendant, those counties are filled in with orange and green sapphires.

The Hurricanes’ defensive unit didn’t cause any turnovers in their home opener against the University of Alabama so the long-awaited reveal was held over to Week 2.

During that game, fans did get to see the team’s 2020 “touchdown rings” for the first time after running back Cam’Ron Harris took a handoff, busted through the line and scampered untouched for a 66-yard touchdown. The Hurricanes would go on to win 31-14.

The rings span eight knuckles and spell out “The Crib” when the two fists are held together. The script words are adorned with orange and green sapphires. The rings are set with 829 and 1,096 gems, respectively.

The celebratory turnover chain is the team’s fourth in four years. The first incarnation of that chain, in 2017, featured a diamond-encrusted “U” hanging from a Cuban link chain. The 2018 edition highlighted a jeweled Sebastian the Ibis, the team’s mascot, but no “U” logo. The 2019 version was a diamond-adorned “305,” a number that refers to the South Florida area code.

Saturday’s win lifted the Hurricanes to  #12 in the new AP college football rankings.